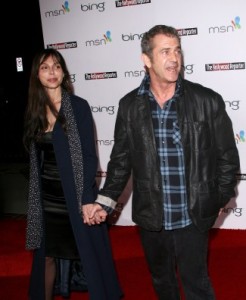 TMZ reports that their experts have determined that Oksana’s injuries to her mouth and teeth are self-inflicted!    This would be in keeping with her clearly well orchestrated frame up job of Mel Gibson.  Earring microphones, leaking tapes to the media, extortion attempts… these are some of Oksie’s tricks in her attempt to get rich quick through her association with Gibson.    He is super rich and she clearly wants to be well paid for being his babe – he on the other hand does not feel like being taken for a ride by the gold-digging Ho.    The question that comes up right away when I think about the farcical predicament in which he finds himself is ‘what was he expecting form her anyway?’    Did he think true love would be his?  If so then why the stringent pre-nup?  If you get together with someone and the main thing on your mind is how to keep her rapacious claws out of your stash then should you be joining hands with her anyway?

I don’t like Mel’s anti-semitism.   Some one as smart as he is ought to be able to break away from the anti-semitic indoctrination his father bestowed upon him growing up.  Mel’s dad is well known to be a conspiracy theorist.   In a 2003 interview he questioned how the Nazis could have disposed of six million bodies during the Holocaust and claimed that the 9/11 attacks were perpetrated by remote control.    He has also been quoted as saying the Second Vatican Council was “a Masonic plot backed by the Jews.”    Mel Gibson, like his Dad, truly seems to think that Jews form a serious threat to World Order and that they wield great power in an organized and destructive way.    However I am unwilling to ‘throw the baby out with the bathwater’ in the sense that  I recognize Gibson as a great acting, directing, and producing talent although I despise his personal racist viewpoints.  Likewise, in his battle with Oksana I support him fully based on all evidence to date.