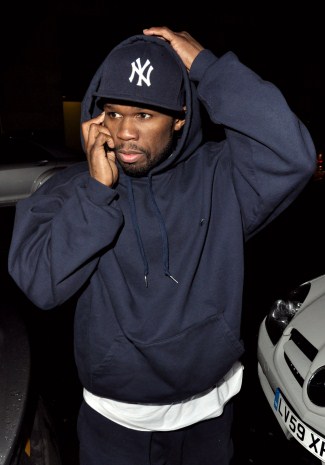 50 Cent launched into his tirade during a radio interview and also claimed the multi-millionaire hip-hop star "sucks the life out of everyone".   The tirade comes after Diddy – who has a new band Dirty Diddy Money, which is comprised of him and two female singers – slammed 50 earlier this year in Miami.

50 told Eminem’s radio station Shade 45: "Puffy is a bitch. He wanted to be the hot bitch in his group… You know how an ugly bitch surrounds herself with pretty girls? Well, he is the pretty bitch with the other girls around him.   "He will suck the life out of everyone he is around."   50 – real name Curtis Jackson – then went on to say how he used to speak regularly to Diddy on the phone, and even once sent him photos of his girlfriend Cassie with another man, before they got together.

He said: "We used to kick it on the telephone, me and Puffy. I said, ‘You f*** this girl? You like her like that? I’m going to send you something.’ Then I sent the photos.   "He was like, ‘Where did you get those?’ "   The pair’s long-running feud picked up again last month when 50 claimed no one will buy Diddy’s upcoming new album ‘The Last Train To Paris’ because it "sucks".   50 told America’s Jam N 94.5: "His music sucks. It’s bad. He’s not an artist anyway, so it doesn’t really matter. When you think about it, is he a rapper? Because he says he doesn’t write rhymes, he writes cheques."   He added: "Nobody’s buying [‘Last Train to Paris’] he even said it himself that he doesn’t expect it to sell."