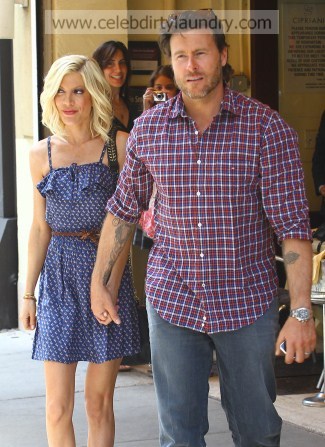 Tori Spelling and her spouse Dean McDermott re-affirmed their love for one another on Saturday (08.05.10) whilst stood in a sandpit in a private ceremony at a Beverly Hills house.   Tori wore a low-back strapless white dress as she walked down the aisle with their 23-month-old daughter Stella to a waiting Dean and the couple’s three-year-old son Liam.

The couple – who first wed in a private ceremony on a beach in Fiji in May 2006 – held hands and gazed at each other lovingly as they repeated their original vows while their young children played in the sand at their feet.   According to Us Weekly magazine, the 36-year-old actress “was teary-eyed as she read hers. Then they rinsed their wedding rings in the ocean water from the buckets and received the traditional vow exchange. “

During the romantic ritual, Dean, 43, presented the blonde star with a bespoke diamond-encrusted eternity ring by jewellery designer Neil Lane.   Towards the end of the service the pair gave their young offspring matching gold bracelets to mark the occasion.   Tori and Dean then kissed as guests threw handfuls of white feathers in the air around them.   The event was especially significant for Tori, who was joined on her special day by her mother Candy – who she recently reconciled with following several years of estrangement.   At a party after the day’s romantic ceremony, the blonde actress told Candy: "Thank you so much for coming."  Photo: Fame Pictures