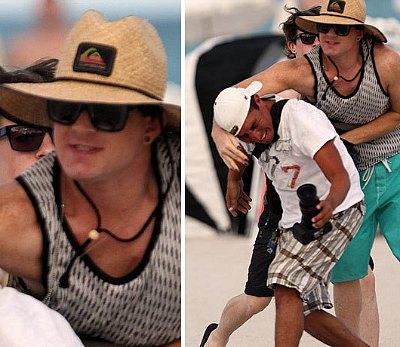 Adam Lambert is involved in an investigation surrounding whether or not he assaulted a photographer on Miami beach yesterday.

The Miami Beach Police Department is now investigating the incident, because the paparazzo claims that Adam grabbed his backpack “where the camera was placed” and “wrestled him to the ground forcefully.”

As you can see from the photograph above, the photographer actually had the camera in his hand and not in his backpack as he claimed.

The police report also notes that the photog didn’t sustain any “bruises or lacerations.”

Cops tell detectives will decide if the case is worth turning over to the State’s Attorney — who will decide whether to prosecute Lambert. If convicted, Lambert could face up to one year in jail and a $1,000 fine.

After yesterday’s clash — Lambert went right to his Twitter account and posted, “I lost my temper for a sec but wow it felt great lol MIAMI!!!”

What do you think of the incident? And where’s the video???