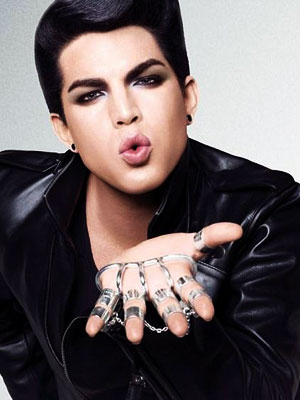 Adam Lambert is facing a big problem – he is planning on presenting his sexually provocative act in Kuala Lumpur, Malaysia, this Thursday (10.14.10).   This is a country that is formally Muslim and has zero tolerance for public displays of affection, let alone gay love!  Homosexual relations are strictly illegal in Malaysia and a guy like Adam, who pushes the envelope even for such liberal venues as London and Hollywood, is going to absolutely freak out his audience and the authorities in strict Muslim Malaysia.

Stars such as Black Eyes Peas’ Fergie, Avril Lavigne, Pitbull and Beyonce have had problems with the Pan Malaysian Islamic Party (PAS) and either cancelled or severally toned down their shows. PAS official, Nasrudin Hasan says,  “Adam Lambert’s shows… are outrageous, with lewd dancing and a gay performance that includes kissing male dancers, this is not good for people in our country.”  Whereas the stars mentioned above are somewhat spectacular in their suggestive performances they still rely primarily on music for their performance basis but Adam Lamberts’ show is nothing without its sexual component.

In fact it seems that Adam chose to go to Malaysia to stir up trouble – to get himself back into the headlines – and if he starts kissing the boys in the band he will make headlines – but at what cost?  Don’t forget that Malaysia takes its law enforcement seriously, to say the least.  They do not hesitate to apply capital punishment as the penalty for crimes that would get you several years in jail at most in the West.

Be careful Adam – you are not at home any longer – Islamic Justice can be fierce, extreme, and brutal.  Don’t lose your head!