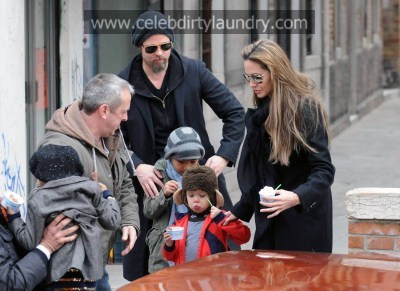 ‘Salt’ actress Angelina – who raises six children with her partner of five years – already has an array of body art and has now added a heart on her inner thigh to show her love for the Hollywood heartthrob.   When asked about the inking, Angelina replied: "Um, it’s for Brad."

Although she refused to give any more information on the design, she admitted it probably won’t be long before she does, admitting to MTV: "I’m bad at hiding secrets."   Angelina also defended four-year-old daughter Shiloh’s sense of style after she recently revealed the blonde-haired tot likes to dress as a boy.   The 35-year-old screen beauty – who also has Maddox, eight, Pax, six, Zahara, five, and two-year-old twins Knox and Vivienne with Brad – said: "I think Shiloh is fascinating, the choices she is making. And I would never be the kind of parent to force somebody to be something they are not. I think that is just bad parenting."

Speaking previously about Shiloh’s fashion sense, Angelina said:   “Shiloh, we feel, has Montenegro style. It’s how people dress there. She likes tracksuits, she likes regular suits. She likes to dress like a boy. She wants to be a boy. So we had to cut her hair. She likes to wear boys’ everything. She thinks she’s one of the brothers.”