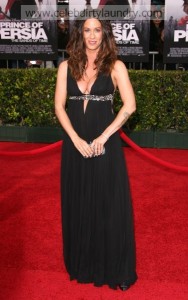 Rock star Alanis Morissette has revealed she is expecting her first child with her rapper husband Souleye – real name Mario Treadway.  The 36-year-old singer made a list of the “25 Things You Don’t Know About Me” for Us Weekly magazine and the final entry said “I am pregnant!”

No other details are yet to be revealed.  Elsewhere in the list, Alanis reveals she considers her marriage to Mario to the wisest decision of her life.  She said: “The smartest thing I have ever done is marry my husband, Mario Treadway.”  The ‘You Oughta Know’ singer is also writing a book that will detail what her beliefs in life are, but she is adamant it is no way an autobiography.  Listing the revelation at number 3, she said: “I’m in the middle of writing a book that is part psychology, part philosophy, part spirituality, part Q&A, part prose, part art – and is not a memoir.”

Alanis and Mario tied the knot in a small ceremony at her Los Angeles home on May 22.  The Canadian musician has made no secret of the fact she would like to have children by the time she is 40.  She said: “I would definitely consider adoption, no question about it, at some point in the future.  “Ideally, I’d like to be married and starting a family before I’m 40.”