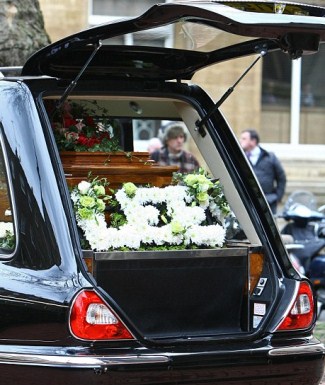 Crowds of mourners gathered at St Paul’s Church in Knightsbridge, London, today (25.02.10) to pay their respects to the 40-year-old designer, who was found dead two weeks ago.

Some of the biggest names in fashion, including Naomi Campbell, Kate Moss and Stella McCartney, attended the private ceremony.  Bouquets of flowers, which included lilies and white roses, were delivered to the church ahead of the service, which was also attended by McQueen’s father Ronald and his five children.

McQueen – real name Lee – was discovered hanged in a wardrobe at his London home by his cleaner on the eve of his beloved mother’s funeral on 11 February.   An inquest into his death was told he left a suicide note for his loved ones, which is believed to have been found at the scene.  McQueen – who was born in London’s East End – was named British Designer of the Year on four occasions between 1996 and 2003 and made clothes for a whole range of high-profile stars, including Britain’s Prince Charles.

He was also awarded a CBE as well as being named International Designer of the Year at the Council of Fashion Designer Awards.