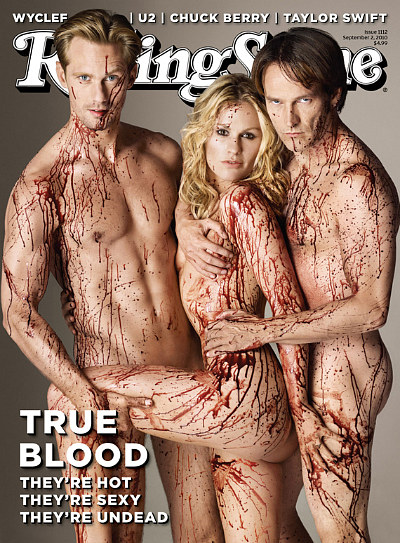 It’s really no secret that Alexander Skarsgard loves being naked. And it’s not a secret how happy that statement makes us, we love to think of him, on set as Eric Northman without a modesty sock. Alex is hot, in and out of character and his personality is just as awesome.

In a new interview, Alex was asked what went down with the nudity that showed himself, Anna Paquin and Stephen Moyer on the cover of Rolling Stone.

On the topic of nudity, Alex said, “Why do I “love being naked”? [Laughs] Because I was born that way? I didn’t write the scripts but I don’t mind it if it makes sense. It’s about being comfortable and if it makes sense story-wise. The only time it can get awkward is if you feel exploited, like, ‘Why am I standing here naked?’ and I’ve never felt that. There’s always a reason for it on the show and it’s always at great moments: fun, crazy scenes. So I really don’t mind at all.”

With regard to the controversial nude cover of Rolling Stone, he said:

The Rolling Stone cover just happened on the day. We showed up and we shot very PG-13 with our clothes on for basically the whole day, like six or seven hours. T hen towards the end the photographer said, ‘I have this, these shots are beautiful and the magazine is going to be happy with them but I’d like to try something if you guys are game.’ He explained it and it was just one of those things in the moment where we all looked at each other, we’d spent all day with the photographer, we felt comfortable with him, we knew that he was great and the atmosphere was right and we were like, ‘F*ck it, let’s do it.’ No one thought that the magazine would go for it. T hey want to sell at Walmart. We thought this was going to be too offensive. But I guess they did. [Laughs] I’m glad they did! I liked it a lot. It was definitely more interesting than the safe version…”

He’s so hot, we’ll take him any way we can get him. What do you think?