Amber Portwood Admits She Was Drunk 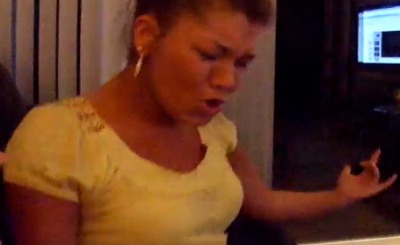 You would think this misfit would learn to watch herself more when the cameras are rolling, but not so. Teen Mom star Amber Portwood admitted on camera that she was drunk….or “possibly drunk”.

Considering that she was charged with two felonies yesterday for several attacks on her fiancee Gary Shirley, you would think she would have more sense than that. But it just goes to show you, kids don’t know as much as they want you to believe they do.

TMZ obtained footage of Amber (shot last week) rocking out to the song, “I’m Not Your Boyfriend Baby” — showing a particular penchant for the lyrics, “These children learn from cigarette burns … fast cars, fast women and cheap tricks.”

During the jam session, a stumbling Amber — who was charged with domestic violence and battery yesterday — says to the camera, “I’m drunk” … then moments later says, “possibly drunk.”

These people….Ugh, I just can’t. Who thought it was a good idea to make these teen girls celebrities just because they got knocked up???