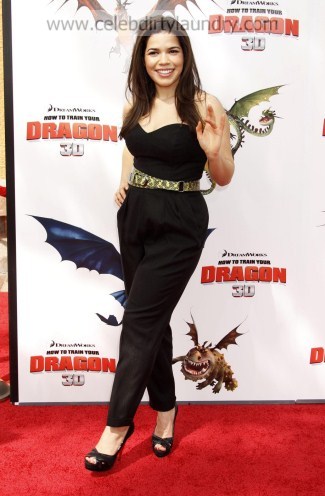 Via HighBeam America Ferrera pictured above at the LA premiere of  ‘How To Train Your Dragon’ couldn’t wait to get out of the Valley.   Nothing against the 818, says the star of TV’s "Ugly Betty," who grew up in Woodland Hills and attended El Camino Real High School, but she had plans.   "The Valley reminds me of my childhood," says Ferrera, who appears in the just-released film "Under the Same Moon."   "I had a really rough time through high school. I don’t think I liked myself very much. High school is a very hard place to like yourself. It’s easier for some people, but it wasn’t very easy for me."

Ferrera chalks up her troublesome high-school years, in part, to a rare single-mindedness of purpose about who she was and what she wanted to do.   Simply put, long before she entered her teens, Ferrera knew she wanted to go to college and she wanted to act, not necessarily in that order. When people asked about her backup plans, Ferrera would shake her head.   "I’m very much in awe of how young children have such bravery to dream so big. They just don’t question it," she says. "I never questioned it. I used to lie in bed and say, ‘I don’t know how I’m going to get there. I just know I’m going to.’ I was, like, 10 and thinking, ‘What is taking so long? Why has my life not started?’ "Times have indeed changed. The woman who utters these words from the terrace of a Beverly Hills hotel is a USC graduate with a degree in international relations. She’s also an Emmy, Screen Actors Guild and Golden Globe Award winner. In its two seasons, the telenovela- inspired sitcom "Ugly Betty" has become something of an international phenomenon.

Ferrera turns 24 in April, and she’s still asking questions. The last two years have been prosperous and fulfilling, and they have also made the actress look inward.   "There is no possible way someone standing on the outside could know what I’ve been through in my life," says Ferrera. "Sure, it looks like a Cinderella ball. It’s an amazing show, and the fame and the awards and recognition, but those are just the side effects of what, for me, is truly fulfilling. I work really hard for something I’m really proud of.   "There’s kind of a calm about it for me," she continues. "There are so many ways to become frightened of your own success. It’s a big learning lesson in questioning why do I do this and what is it for? And what do I want out of it?"

To read the rest of this article visit HighBeam.  Photo: Flynet Pictures