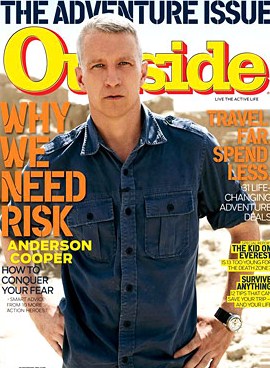 Primary Anchor for CNN 42 year old Anderson Cooper graces the April 2010 cover of Outside Magazine – The Adventure Edition.  Below is a  glimpse of the interview in the magaine:

On overcoming fear: “I don’t believe you should be ruled by fear in anything in life. I don’t like anything that scares me, I prefer to face it head-on and get over it. Anyone who says they’re not scared is a fool or a liar or both. I just don’t want that fear in my stomach to be a part of my life, so I work to eliminate it.”

On skydiving being senseless: “I have no interest in jumping out of an airplane, or any of the things people do for thrills to push the limit and all that. To me, that seems foolish. There’s no point. If people are suffering in a place, to me, it’s not a question of whether I’m going to go or not. It’s a question of how fast can I get there.”

On His Relief Efforts In Haiti: “You suddenly find yourself in a situation where, you say … what do you do? There are some journalism purists who say that you do nothing, that you just watch and report, and I certainly understand that. But in the case of a little boy who got hit in the head with a cement block, no one was helping him. He couldn’t get up. … Blood was pouring from his head. It was a split second decision to take him out of the situation.”