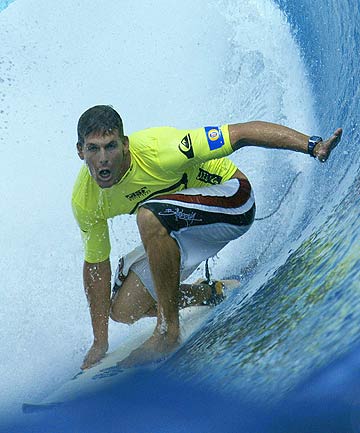 The investigation into the sudden death of Surfing Champion Andy Irons at the tender age of 32 continues and now an overdose of the heroin substitute, methadone, is looking probable.  The required toxicology tests can take from 60 to 90 days and in the meanwhile speculation will continue.  Irons failed to respond to a hotel wakeup call and was found dead in bed when hotel staff checked up on him.

There were no signs of trauma. But methadone was found inside a container of a prescription drug called zolpidem, the medical examiner said. Zolpidem is commonly used for insomnia, while methadone is a powerful controlled substance used for pain. The container, as well as numerous other medications, was found on a nightstand, the medical examiner said.

Originally his family and others were attributing his death to Dengue fever but why he checked into a hotel instead of going to hospital made no sense at the time.  In the context of methadone and other drug use though, the avoidance of a hospital visit makes more sense.  The methadone was found in a container for a powerful anti-insomniac drug known as zolpidem – there were numerous other un-named drugs found at the scene as well.