Angelina Jolie Is A “Goof Ball” 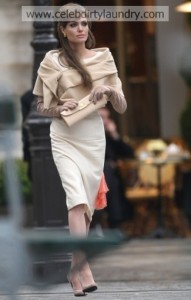 Angelina Jolie – who raises six children with partner Brad Pitt – is famed for her action skills in movies including ‘Lara Croft: Tomb Raider’ and ‘Mr. and Mrs. Smith’ and her humanitarian work but admits that she is not as serious as people think. She revealed: “Personally I think I’m very goofy. I probably laugh more than people imagine. But I don’t think I’d be very good in a comedy, I might be better as a straight man.”

However the actress is not planning to swap action roles for comedy any time soon, admitting that loves doing stunts. When asked if partner Brad gets worried about her daredevil stunts she explained: “He’s not fearful at all. We met doing stunts together and he knows I could do pretty much anything I decide to. “He’ll ask me to double check my harness or not to get sloppy on the roof, but we both are very, very responsible”.

Angelina recently revealed that her four-year-old daughter Shiloh has inherited her mother’s silly streak. She said “Shiloh’s hysterically funny, one of the goofiest, most playful people you’ll ever meet. Goofy and verbal, the early signs of a performer.” It has also been alleged Mel pulled a handgun on Oksana following an furious row, in which he is believed to have broken her two front teeth and threatened her with a bat.