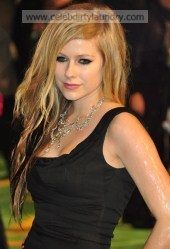 Avril Lavigne’s boyfriend Brody Jenner – who has previously featured in MTV programmes ‘The Hills’, ‘The Princes of Malibu’ and ‘Bromance’ – is said to be desperate to land a deal for the couple, despite the singer’s reluctance to appear on camera.   A source told In Touch Weekly magazine: “Brody has been begging her to do it. She’s in love with him so she doesn’t want to say no.” But she really doesn’t want to take her career that direction, either.”

The ‘Girlfriend’ singer and Brody have been dating since February and recently got two sets of matching tattoos.   The pair decided to show their love and devotion to each other by having each other’s names etched onto their bodies.   Avril – who filed for divorce from her husband, Sum 41 rocker Deryck Whibley, last October – has Brody’s name inked next to her right breast while Brody’s Avril tattoo is on his inner arm.   In April, it was reported the pair had the same lightning bolt designs etched onto their bodies.   Avril had her tattoo on her forearm, whereas Brody opted for his to be behind his ear.