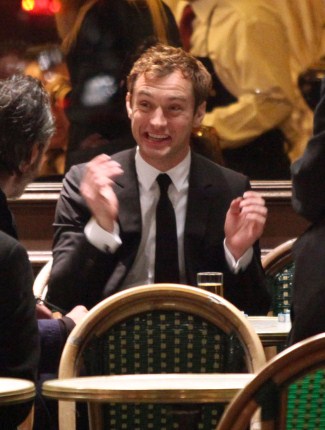 Jude Law is reportedly undertaking proceedings against Sadie Frost – with who he has children Rafferty, 14, Iris, 10, and Rudy, eight – to prevent her revealing details of their six-year marriage in her forthcoming autobiography ‘Crazy Days’.   A source said: “Jude is trying to injunct her to stop the book."

The 37-year-old star’s actions are said to have stunned 44-year-old Sadie, who had no idea about her former husband’s unhappiness with the tome.   The source added to the Mail Online website: "She’s poured her heart into this and is upset and hurt by what Jude has done. She thought they were getting on very well — and suddenly he’s serving a 100-page writ.   "It’s ironic, because he had been at her house earlier in the day and they discussed the book, which is going to be very honest. She knows he has reservations, but she’s let him read bits of it. She’s astonished he’s taken this step."   Despite Jude’s concerns the book will upset his children with revelations about the couple’s turbulent marriage, Sadie’s friends insist she isn’t planning to reveal details of their relationship.   Jude – who is now engaged to actress Sienna Miller – married Sadie in 1997 and they divorced in 2003.