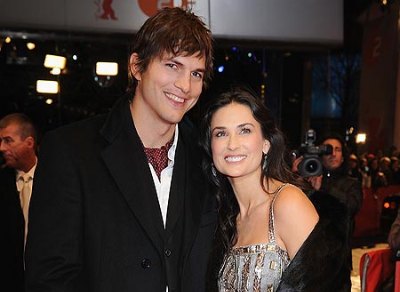 A few weeks ago, Star magazine weaved a tale about how Ashton Kutcher became a member of the mile-high club with some random chick named Racine NoLastName. Ha!

Now, they want us to believe that Ashton couldn’t keep it zipped again, because he’s banging some new broad. Unbelievable! Hasn’t he already threatened to sue them for defamation? Because after that, you would think that the only way that they’d try to come out with another cheating story is if they had proof – like a video maybe?

The brunette Demi look-alike — who you’ll see only in Star — says that she met Ashton in July while bowling at Lucky Strike Lanes in Hollywood. Although the That ’70s Show star was there with Demi, his stepdaughter Rumer Willis and some other friends, it didn’t stop him from swooping in and striking up a conversation with the young woman, who was sitting at a cocktail table.

Although the woman admits she knew Ashton was there with Demi, that didn’t stop her from slipping him her number on a cocktail napkin when he was getting ready to go. But little did she know that just days later she’d be having sex with Ashton on a sofa in the house he shares with Demi and her daughters!

“I felt totally comfortable in his arms,” she tells Star. “It was tender and nice — not some random sex act.”

In other news, there are people on the planet who actually admit to having sex with Kelso.