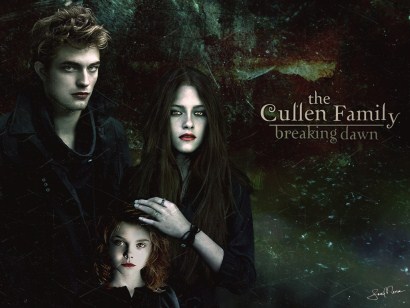 For all the “Twihards”  Summit Entertainment has released dates for  part two of  “The Twilight Saga: Breaking Dawn,”  with that installment in the popular vampire romance film franchise now set for Nov. 16, 2012.

If you are not a Twilight fan and don’t know what a “Twihard” is the definition in the “urban dictionary” is:

“Twihards (usually young females) are obsessive fans of the “Twilight Saga” series of books by author Stephenie Meyer, and the film adaptations. Twihards embrace all things Twilight with religious zeal, daily visiting fansites, quoting dialoge from the series, and stalking (online or in person) the films’ stars, especially on the Vancouver BC movie set. Most Twihards are “Team Edward”, although the self-declared sub-category “Team Jacob” also qualifies for the Twihard designation.”

“Breaking Dawn – Part One” is set for  release on Nov. 11, 2011.   The two-part fourquel is being directed by Bill Condon.   The Twilight Saga movies were previously filmed in Vancouver,Canada  but these will be filed in Lousianna – I wonder if it will change the feeling of the movie?