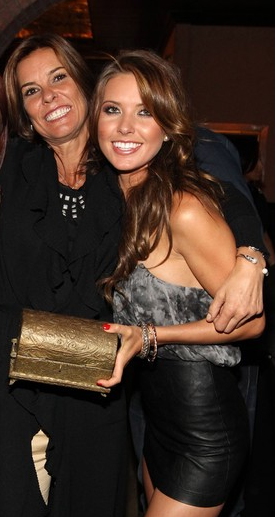 Audrina Patrdige’s mom had one too many last night after a family dinner at Beso after DWTS.  In a rant to the paparazzi she talks about how Audrina kicked ass last night on DWTS.  She uses the F-bomb several times against Len and other judges.  While someone called Kelly tries to shut her up but that is not going to happen and Lynn spews language worse than a trucker with F bombs every other word.  Below are some of the highlights of the rant.  Watch the video you won’t believe it but be prepared there is a lot of cussing.

About why Audring did not win – Audrina could have won DWTS but it was not God’s will.

About Lauran Conrad – that pissy ass little fashion shit that girl wants to bring it.  Bring it on.

About being A  celebrity for 8 yrs during the hills – Out of all the hills tramps my baby is a star she is the only one with class.  I don’t give a f*!? about it.

She really is very drunk at one point she gets confused and thinks Kurt Russell is Bristol Palins father.  She also says she is getting her own reality show.  Her parting words were Audrina is going to be so pissed at me.  LMAO no joke I bet Audrina is mortified this morning about her mother’s behavior.  Watch the video – what do you think?  W0uld you want this women for your mother, she could rival Dina & Michael Lohan.