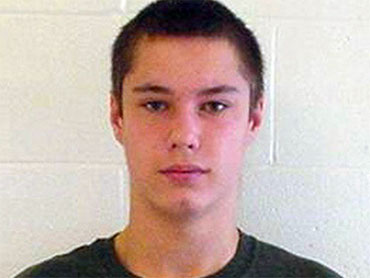 Colton Harris-Moore is the Barefoot Bandit – the teen who taught himself how to steal and fly planes, burgle homes, steal cars and boats, and live alone in the wild was finally caught and arrested in Bahamas last year after being on the run for years.  He got his nickname after police found his bare footprint at the scene of one of his more than 100 home robberies.

Radaronline reports – Colton-Harris’ mother Pam Kohler said on Friday that she’s spoken to her 19-year-old son several times since his arrest July 11 in the Bahamas, where he’s been accused of stealing a speed boat, among other things.  “I tell him about his dog and what’s going on here,” Kohler said, adding that they never speak about his time as a fugitive. “I try to keep his spirits up.”

Originally from Camano Island, Washington – Colt had a troubled childhood with an alcoholic mother and a drug taking convict dad – by the age of 7 Colt often ran away from home and lived in the wild!  Quickly he seemed to adapt to the fugitive lifestyle becoming in a sense a master thief – evading capture by police in several states and Canada for years before finally getting nabbed in Bahamas.

Although facing 42 years in jail if convicted on all counts with which he is charged, Colt being at least a bit crazy and non-violent in his criminal activity is likely to get a much lighter sentence.  This is good news for the Barefoot Bandit since both a book and a movie about his life will be produced and this could lead to quite the professional career on the talk-show circuit for this mysterious and obviously brilliant young man.