Bella and Edward Die In Breaking Dawn Scene Or Do They? 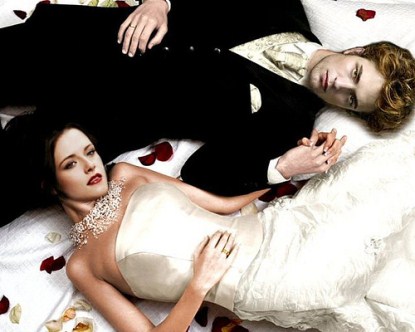 A source who claims to have read the script for The Twilight Saga – Breaking Dawn describes a gruesome scene that sees Carlisle Cullen (Peter Facinelli), Edward Cullen (Robert Pattinson) and Bella Swan (Kristen Stewart) dead.  The deaths are what will happen if the Cullens and the Volturi do not make peace.  Calm down everybody they don’t actually die it is a vision that Alice Cullen (Ashley Greene) puts in the Volturi leader Aro’s head.  (Michael Sheen) to show him what will happen if they continue on their current course.

Alice touches that head [Volturi] guy…when she touches the [Volturi] guy he “sees” what will happen if he continues his course…OK so the first person whose head comes off is Carlisle. In the vision. Then everything goes to sh-t and all kinds of dying happens. And Bella and Edward kill Aro…After Bella and Edward they die too…all these other people die too. Jane and her brother. Lots of deaths on both sides. Then [Volturi] guy snaps out of it, says he’s sorry. Everybody makes up and lives happily ever after.

If you have read the Twilight books this is not what happened during the meeting with the Volturi but it certainly is much more dramatic.  What do you think – would you rather they stay more true to the book?