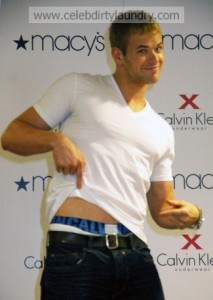 Ripped ‘Twilight’ star Kellan Lutz has topped a list compiled by the editors of MensHealth.com to find the star with the perfect beach body.   The 25-year-old hunk beat toned actor Matthew McConaughey and his muscular ‘Twilight’ co-star Taylor Lautner to the top spot.

David Zinczenko, editor-in-chief of Men’s Health, said: “All of this year’s finalists have a deep commitment to working out, staying fit and eating smart. They have a variety of workout regimes from boxing to weight training, kayaking and hiking to training for marathons. They’ve worked hard to achieve and maintain their amazing bodies – which is why they’ve earned their place on this year’s list.”

Other stars to make the final 10 include Zac Efron, who came fourth, Jake Gyllenhaal – who was placed at number eight after bulking up for his role as Prince Dastan in ‘Prince of Persia: The Sands of Time’ – and Daniel Craig and Channing Tatum, who finished ninth and tenth respectively.

Anyone keen to achieve Kellan’s impressive physique can log on to MensHealth.com to view his exercise regime which involves a total-body circuit workout.   Sports Illustrated model Brooklyn Decker was named the woman with the Best Summer Body by Women’sHealthMag.com with Jessica Alba and Ashley Greene coming second and third.  Other female stars to make the top ten include Jessica Biel, Katy Perry and Jennifer Aniston.