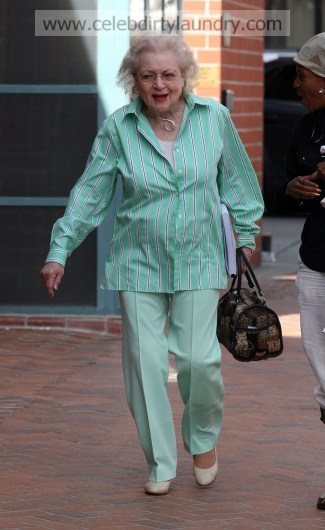 Betty White the former Golden Girl will appear on Saturday Night Live in the near future, she confirmed to PEOPLE at Elton John’s annual Oscars viewing party on Sunday night.   Fans have been clamoring for White, 88, to do SNL – an idea she called "ridiculous" just a few weeks ago – ever since her comic turn in a Snickers ad during the Super Bowl.   One Facebook page devoted to the cause has attracted half a million fans.

When asked by PEOPLE, "Are you doing Saturday Night Live," she answered, "Yes," even if she remains perplexed by the groundswell of support.   "I don’t know why or how," she says, "but it’s been wonderful."

Betty White recently said about hosting SNL "No nudity! I’m going to point that out ahead of time. No nudity."   I guess SNL agreed to her requirements ;-)  Photo: Fame Pictures