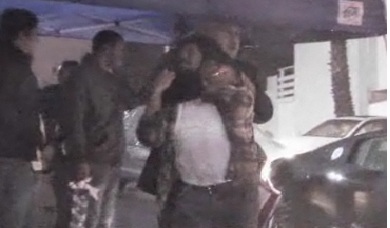 Bob Marley had many children, one of them, Rohan Marley was leaving the Voyeur nightclub in Hollywood Saturday night when he mistakenly thought that someone was a car valet – this person took offense and he and Rohan first exchanged words, then blows and then a club employee, who happens to be an off duty cop maced the scufflers and restrained Roahn in a chokehold!

Poor Rohan, he has decided that the cop went overboard and that “I can’t just let this go.”  So Marley says he might have to press charges since he was just defending himself.

What a joke.  Marley leaves a nightclub, mistakes a patron for a valet, gets into an argument, then starts fighting and trading blows – so a club employee – an experienced policeman no less, is forced to use mace on the combatants and subdue Marley.  And Marley says he wants to press charges… should the officer have allowed the patrons to continue battling on club property?  Grow a brain Rohan. (see video HERE)