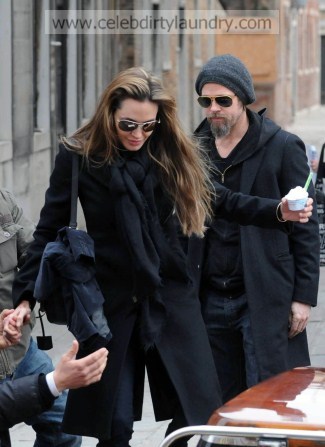 The couple – who raise six children, Maddox, eight, Pax, six, Zahara, five, three-year-old Shiloh and 21-month-old twins Knox and Vivienne –are reportedly determined to shield their nuptials from the public and have decided to opt for a low-key affair in order to avoid accusations of wasting money.

A friend of the couple told America’s OK! magazine: “Brad and Angelina are exceptionally private people, and they pride themselves on being humble and not wasting money.   “So some over-the-top, beachfront affair with hundreds of guests isn’t going to happen.”   It has been claimed the couple – who have been dating since meeting on the set of 2005 movie ‘Mr. and Mrs. Smith’ – only decided to get married after their older children begged them to make their union official.

A source close to Brad – who was previously married to Jennifer Aniston – and Angelina said: "First it was Maddox, who has begged his parents to tie the knot for years.   "Lately, Shiloh and Zahara have been chiming in, and Pax thinks it would just be the coolest thing ever to be a ring bearer."   Angelina, 34, has previously admitted she and 46-year-old Brad are expecting the children to eventually start questioning why they had never got married.   She said: "Usually people fall in love and everything revolves around the ritual of marriage, children are an afterthought. We did everything backwards.   "But sooner or later it will be the kids who ask us to get married. You know, they see films and start asking questions. Such as, ‘Why are Shrek and his love Fiona married and you’re not?’ "  Photo: fame Pictures