Brad Pitt And Angelina Jolie Getting Married In India 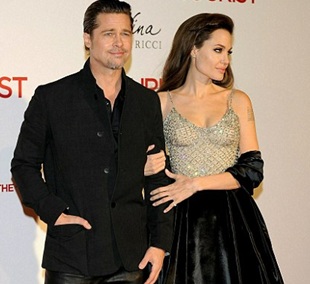 Apparently after years of speculation Brad Pitt, 46,  and Angelina Jolie, 34, who are raising six children together have finally decided to tie the knot.   They have decided to have the wedding in India and have a Hindu ceremony in Adhyatm Vigyan Satsang Kendra healing centre, in Jodhpur, north-west India.  The wedding is set to take place Valentine’s Day 2011.

The Globe And Mail reports:  Actually, it all makes sense. You see, the Hindu priest who will be front and centre at the wedding is reported to have saved Brangelina’s relationship through couples’ yoga and meditation, and so the famous couple is going to get hitched at his ashram.

Angelina and Brad are not the first Hollywood couple to marry in India.  In October Katy Perry & Russell Brand got married in India.