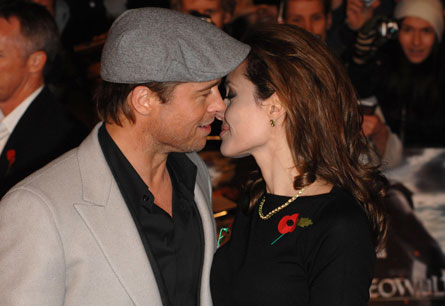 The women I would most like to be cause I have a huge crush on her boyfriend :-) Angelina Jolie – who raises six children, Maddox, nine, Pax, six, Zahara, five, Shiloh, four, and two-year-old twins Knox and Vivienne, with my future husband Brad Pitt – had to don a masculine disguise for her new action movie ‘Salt’ but admitted neither her partner or her eldest son were impressed with the look.

Speaking at the gala premiere of ‘Salt’ at the Empire Cinema in London’s Leicester Square, Angelina told BANG Showbiz:

“Maddox was freaked out. I invited him to come and say hi to me and I didn’t tell him who I was. He came down shook my hand and hung out with me for a while and then I said, ‘Mad’ and he screamed, ‘Mom!’.   He totally freaked out.   And Brad couldn’t even kiss me!”

Angelina has left her four older children in the care of their father and has been accompanied on her trip to the UK by Knox and Vivienne and hinted the children could yet have another brother or sister.    When asked if she would like to add to her family, she replied: “Oh I don’t know, but I’m open to it.”