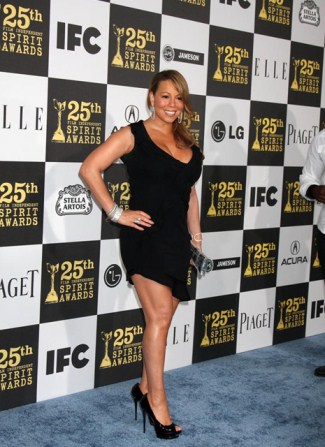 40-year-old singer Mariah Carey  is said to be “very excited” about expecting her first baby with husband Nick Cannon – who she married in May 2008 – but is trying to keep the news quiet.

A source told RadarOnline.com: “They’re both very excited and very happy.   “Mariah and Nick want to keep the pregnancy quiet as long as they can.”

A spokesperson for the star refused to confirm or deny the news.   Her representative Cindi Berger said: “I am not at liberty to discuss Mariah’s personal life at this time.”   Mariah first hinted she was planning a family in March.   Speaking at the Independent Spirit Awards, she said: “Something else very special is on the way.”   The singer recently dropped out of her next movie, ‘For Colored Girls Who Have Considered Suicide When the Rainbow Is Enuf’, citing medical reasons, which further fuelled rumours of a pregnancy.