Breaking News: Matt Damon Is To Become A Daddy Again 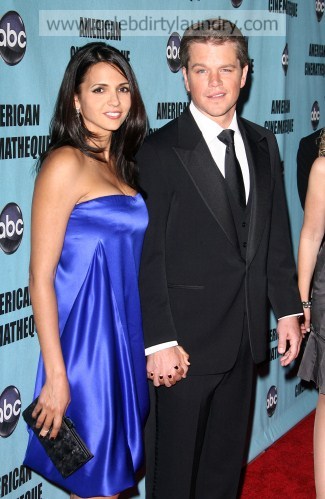 The ‘Bourne Ultimatum’ actor’s wife Luciana is expecting their third child together and the couple are said to be thrilled at the news.   Matt and his spouse already have Isabella, three, and 20-month-old Gia together, while Luciana has 11-year-old daughter Alexia from a previous relationship.  A spokesperson for the Hollywood star said: "Everyone is excited, really happy."   At the time of writing no other details about the pregnancy had been released.

Matt maybe hoping his new arrival will be a boy after previously confessing he feels outnumbered by all the girls in his house.   He said: "I live with women and girls so I don’t have control over anything!"    The 39-year-old big screen heartthrob – who married Luciana in December 2005 – has also admitted his wife and kids keep him grounded, despite his worldwide fame.   He said:

"It’s pretty easy to kind of lose your way. I think working consistently with great people is really helpful. Also having kids is really helpful. They kind of disabuse you of the notion of your greatness pretty quickly. There’s a routine that you get into with kids that precludes you from going back to your single days. I’m probably more boring than I used to be. I go to bed earlier and I get up earlier."