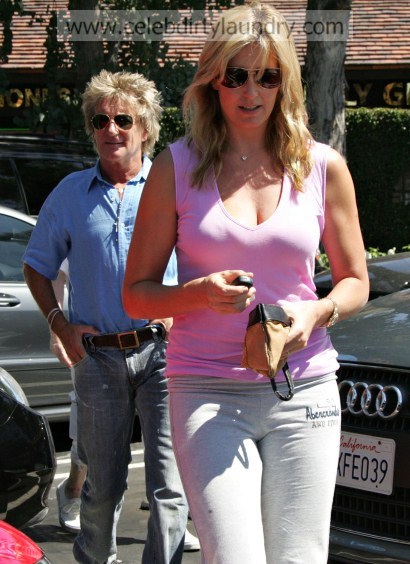 Penny Lancaster, 39-year-old model is expecting her and husband Rod Stewart’s second child together. They already have a four-year-old son, Alastair. A statement released by the couple to Hello! magazine read:

“Penny and Rod were lucky enough to be celebrating more than just their third wedding anniversary in June, as the news came that Penny was pregnant with their second child.  “We were thrilled and delighted to be able to tell Alastair that he was going to be the big brother to a little baby, expected just before mummy’s 40th birthday.”

An additional statement from Penny’s agents Nicholas Young and Veronica Pieters at Crawfords said: “Everyone in the office is overjoyed at this wonderful news. Penny is such a lovely person and a brilliant mum and we wish her, Rod and Alastair all the very best.”   The baby is due just weeks after Rod celebrates his 66th birthday on January 10 2011.  Rod and Penny married in Italy in 2007 following his proposal to the British model on the top of the Eiffel Tower in Paris in 2005.   In November, the ‘Maggie May’ singer – who has six other children from previous relationships – revealed he and his wife were trying for another baby.  He said: “Yes, we’re trying – we actually tried last night! One more and then we’re going to close the office.”