Bret Michaels Back in Hospital 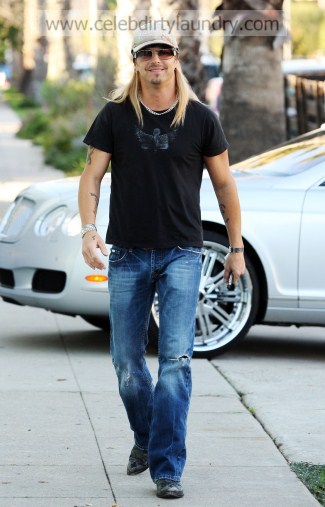 Poor Bret Michaels who was recovering from a brain hemorrhage – is back in the hospital after suffering a mini-stroke.   During testing, doctors also discovered a hole in his heart.  The news is “devastating…to Bret and his family,” says his neurosurgeon, Dr. Joseph Zabramski. Bret has two daughters, Raine, 10, and Jorja, 5, with Kristi Lynn Gibson.   Continues Dr. Zabramski,

“The good news is that it is operable and treatable and we think we may have diagnosed the problem that caused the…warning stroke; however we feel it is highly unlikely this is connected to the brain hemorrhage he suffered just a few weeks earlier. Once again, it is great that he quickly reacted to the severe numbness and got to the hospital immediately.  I realize Bret wants to make a full recovery so that he can be active with his family, attempt to attend the finale of Celebrity Apprentice and especially get back on the road to continue making music. Without a doubt he is very determined to get healthy and make a 100 percent recovery.  Medically speaking it is a fantastic attitude both mentally and physically for him to have. However, Bret’s brain and body are not quite 100 percent yet, especially with the hole found in his heart.”

Says his rep Janna Elias, “Bret wants everyone to know he cannot thank you enough for all of the well wishes, prayers and good vibes you have sent his way. Even though these last few months have been tough on him and his family, especially this most recent setback, he is in good spirits, great medical hands and is positive and hopeful that everything is going to be OK. He is up, walking, talking, continuing his daily rehab and very happy to be alive but he has made it clear he is sick and tired of being in the hospital and is ready to rock again.”  Photo: Fame Pictures