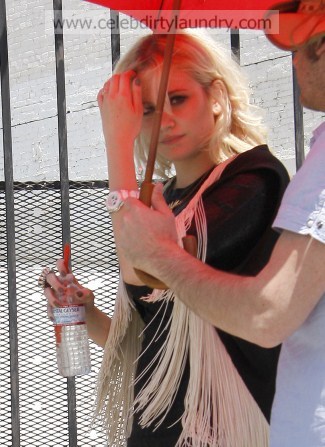 Popular British singer-songwriter Pixie Lott, surrounded by production staff and assistants, shoots scenes for her new music video in Los Angeles Friday, April 16, 2010.   The pop star arrived in Los Angeles at the end of March.   Lott made headlines in her native UK in June last year when her single "Mama Do" went straight to No. 1 in the UK singles charts right after it was released. Her next single, "Boys and Girls" also went straight to No. 1.

The blonde singing sensation was shooting the clip for her next single, Turn It Up, the title track from her hit debut album.   During the shoot she was seen sitting in a silver sports car and talking on from a pay phone.   After she shoot she was quick to fill her fans in on social networking site Twitter.   ‘Just got back from ‘turn it up’ videoshooooooot wheeey! so fun,’ she Tweeted   Photo: Fame Pictures