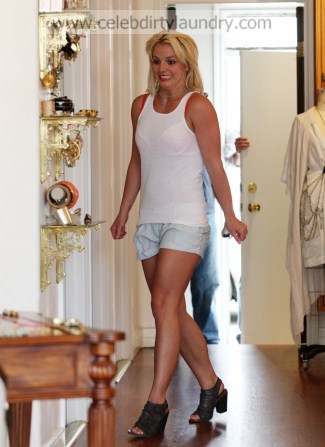 Former policeman Fernando Flores, 29, has quit his job as Britney Spear’s head bodyguard after the mother-of-two allegedly paraded around naked in front of him on numerous occasions.   Flores is now reportedly considering a sexual harassment lawsuit against the ‘Toxic’ singer.   A friend of the father-of-two said: “She was always giving him the come on and he felt if he didn’t reciprocate he could lose his job. He finally handed in his notice last week and is considering legal action.   “Working for Britney is tough. She’s a nightmare to deal with and her emotions are totally out of control. She runs round the house naked and yelling at staff.”

The situation had increasingly become “unbearable” for Flores, but he was finally motivated to quit when he was blamed by Britney’s father Jamie for the singer going out without any underwear.   The pal explained: “Unfortunately for Fernando, she took a liking to him, so he was under more pressure than most. He wanted to be a good security guard and look after her but the situation became unbearable.   “It was embarrassing to tell her to put on underwear. Some guys would do it but others were too ashamed.”