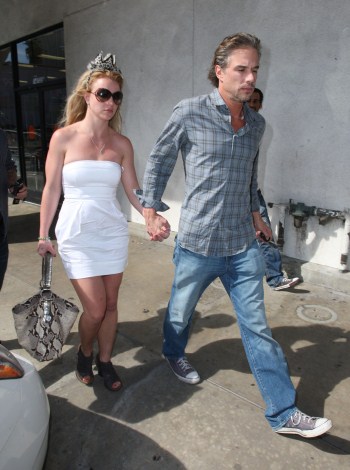 Britney Spears – who has been dating Jason Trawick since March 2009 – has decided to stop working professionally with her lover so they can focus on being a couple.   A spokesperson for the pop star confirmed: “Britney and Jason have decided to end their professional relationship and focus on their personal relationship.  “Since wrapping her recent world tour, Spears has been busy in the studio working on her next album."

This move has quashed rumours the 28-year-old singer and Jason, 38, are on the verge of breaking up.   Jason had represented the blonde beauty through the New York-based entertainment agency, William Morris Endeavor Entertainment, since 2006.   Britney – who has sons Sean Preston, four, and three-year-old Jayden James with ex-husband Kevin Federline – and Jason started dating in March 2009. They split briefly in August, but soon reconciled.   Since their romance began, Jason has reportedly proposed to Britney on numerous occasions.  Photo: Fame Pictures