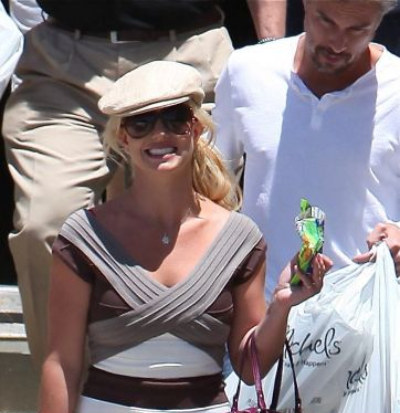 According to sources, Britney Spears is looking to settle down and have another baby! Wha?!??

Britney has been dating boyfriend (and Sam Merlotte lookalike) Jason Trawick for quite some time now, but a snitch reveals that Britney wants to make it official.

An insider said, “Britney’s on top of the world right now and has started wedding plans. They’ve decided to have a small, intimate ceremony – not a big media circus – but they’d like to say ‘I do’ by the end of the year. They’ve been dating since last summer and Jason’s nothing like her exes.”

The spy continues, “She’s aware that there’ll be a big age gap between her elder son Sean and her next baby, so she definitely wants to have another baby sooner rather than later. Brit’s dad Jamie and mom Lynne are fully supportive – since Britney was sectioned two years ago, they’ve been ultra-vigilant about her personal life but they’ve known Jason for years and trust him completely.”

At least he wouldn’t be K-Fed 2.0. Right? What do you think? Is there any truth to the rumor?