Buzz Off ‘Dancing with the Stars’

BY Annemarie LeBlanc on April 7, 2010 | Comments: 2 comments
Related : Dancing With the stars 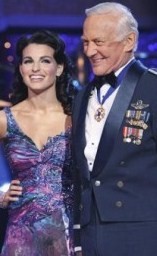 80 year old astronaut, Buzz Aldrin got voted out off Dancing with the Stars.  What the heck is wrong with the voters? Kate Gosselin should have been the one axed.

Kate is probably still on the show because ABC and DWTS are using her for ratings.  Kate absolutely sucks at dancing and has some behind the scenes diva attitude that is going to get her voted off eventually, how long do we have to suffer?  Kate, hang up your dancing shoes and go take care of your children!

Buzz’s final comments were heartfelt and endearing, he said "I did this show for the fighter pilots out there, the military people and the elder geezers like me who would just like to see an elder come back week after week. I’m interested also in having the public be thankful for the great successes we had in the Apollo programme and look forward to even greater successes in the future." I for one will miss Buzz, at least he tried to dance and provided some truly memorable moments on the show.