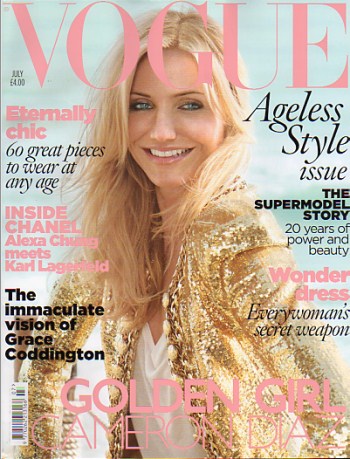 The 37-year-old actress – who is believed to be dating baseball star Alex ‘A-Rod’ Rodriguez – is happy with her appearance, which she credits is down to taking care of herself and having fun.   She said: "I don’t want to look 25 again. The fountain of youth for me, let’s see…I guess it’s exercise, healthy diet, lots of water, lots of laughter, lots of sex — yes, sex, we need that as human beings. It’s healthy, it’s natural, it’s what we are here to do!"

Cameron also confessed that she has not yet relied on plastic surgery to keep her good looks.   She added to Britain’s Vogue magazine: "So far, so good. But I’ll never say never to anything."  While the blonde beauty – who has previously dated stars including Justin Timberlake and John Mayer – was happy to discuss her beauty secrets, she remained tight-lipped about her romantic situation.

She said: "I’m in love with life."   The ‘Charlie’s Angels’ actress has also admitted she doesn’t yet feel the urge to settle down and have children.   She said: “You know how you have these moments of feeling dissatisfied and you think, ‘What would make my life better?’. Well, I’ve yet to go, ‘Aha, that’s it: a child!’ ”