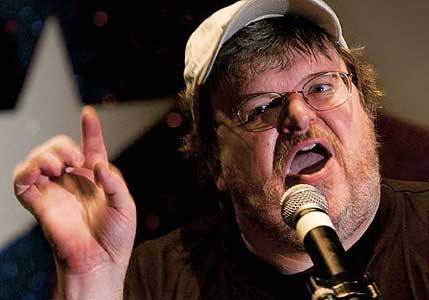 Canada better wake up and take stock of themselves – Michael Moore, the hot dog chomping nonsense/documentary film maker who always plants his ample butt firmly on the far-left whenever dealing with political issues has condemned Canada’s treatment of AWOL US soldiers. Moore said, “It is absolutely shameful how Canada has behaved toward those who have resisted this [Iraq] war. It’s not the Canada we used to know.”

This was followed by his fond memories of a time when he felt that Canada was more suitable to his taste – “This country was so generous to those of my generation who did not want to kill the Vietnamese, and they opened the border.”

Let’s have a look at these comments and see if there is any truth to them.

First of all, the political climate in Canada has shifted far to the right since the 1960’s. The current Prime Minister of Canada takes a fairly hard line against Muslim fundamentalist inspired terrorism. Canada is heavily involved in military action in Afghanistan, attempting to support the relatively moderate government of Hamid Karzai, while fighting the Taliban. It is very unrealistic for Moore to assume that Canada would throw its support behind deserters of the US military when Canada itself is engaged in a similar struggle. The U.S. is Canada’s largest trading partner and a very close neighbor with whom they share anti-terrorist strategy and intelligence. Both Canada and the U.S. have common geo-political interests and and a collective need to protect themselves from Islamic terrorism. Canada is unlikely as a nation to support maverick U.S. soldiers who break the law and desert.

During the Vietnam conflict there was in an uproar with extensive and even violent demonstrations against having US soldiers on the ground in Southeast Asia. This was a time when American university students developed a fairly united left-wing/anti-administration voice and this carried right over into Canada, where the political climate was fairly liberal and the need to interfere with communist incursions in Vietnam and Southeast Asia in general weren’t welcomed at that time.

That era was nothing at all like the post-911 world we now live in where almost all Western Nations are united in their goal to see that our security is not jeopardized by growing Islamic Fundamentalist control in Muslim Nations. So even though Canadian support for the U.S. conflict in Iraq was far from universal, the idea that there was enough anti-U.S. political juice to cause Canada to support American deserters was dubious.

As is usually the case with Michael Moore, his own twisted extremist political viewpoints are not shared by most people in Canada or the USA. His comments are so often way out there and fail to account for the political realities of the post-911 world.   Let me put my feelings another way, and I say this as a Canadian citizen – SHUT UP MICHAEL MOORE CANADA DOES NOT NEED OR WANT YOUR APPROVAL!