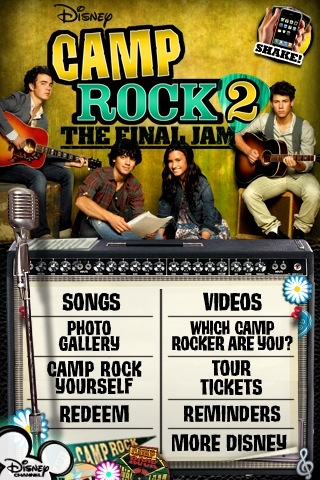 "Camp Rock 2 The Final Jam," is a full out rock ‘n roll musical that celebrates music, dance and the freedom of summer and reminds viewers to ‘enjoy the journey.’ Part of the blockbuster Disney Channel Original Movie franchise that introduced a generation to contemporary movie musicals, "Camp Rock 2 The Final Jam" premieres Friday, September 3 (8:00 p.m., ET/PT) on Disney Channel. The movie’s soundtrack, featuring 15 original songs spanning hip-hop, rock and pop/rock, will be available Tuesday, August 10 on iTunes and in stores nationwide.

The video for “It’s On,” the brand new song from Jonas Brothers off the “Camp Rock 2” film and soundtrack, just premiered on the Disney Channel! Directed by Brandon Dickerson, the clip gives fans a glimpse on what they’ll see in the upcoming movie. "The video is a really cool concept," Kevin Jonas told MTV News. "It takes on the aspect of the music and just the intensity, the high energy of what the song is. … What’s cool is just the passion of all the people who are singing."