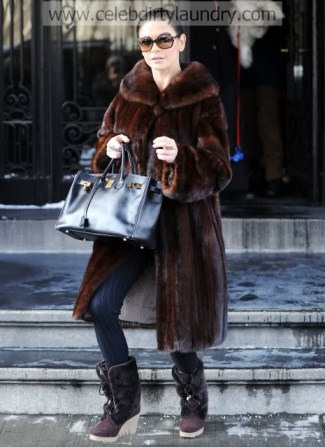 The actress topped an annual list compiled by animal welfare organisation PETA (People for the Ethical Treatment of Animals) because of her "fetish for wearing anything that once moved".
The group even staged a protest outside New York’s Walter Kerr Theater where she is starring in ‘A Little Night Music’ on Saturday (13.02.10).

PETA said: “With her cow-skin pants, ugly fox coat, and icky alligator bag, Catherine Zeta-Jones looks like she’s working her way through Noah’s ark with a knife. “Maybe she’s trying to get into character for an upcoming role as a serial killer – or a taxidermist.”    Other stars to make the organisation’s list included singer Aretha Franklin, US reality TV star Jill Zarin and singer-and-actress Jennifer Lopez, who was dubbed ‘Jenny from the butcher block’ for wearing fur.

‘How To Lose A Guy in 10 Days’ actress Kate Hudson – who recently split from baseball star Alex ‘A-Rod’ Rodriguez – also made the list.  Describing Kate’s look, PETA said: “Kate, there’s no easier way to lose a guy in 10 days than by wearing a hairball. Maybe your furs are the reason why ‘A-Rod’ ran for home.”  PETA also had harsh words for singer-and-actress Jessica Simpson – whose transition into country music flopped last year.  The group said of her outfits: “All resemble her career – dead.”  Kate’s mother Goldie Hawn and singer Rihanna were the other finalists on PETA’s Worst Dressed list.   Photo: Fame Pictures