Celine Dion Introduces Her Twin Boys Eddy and Nelson To The World! 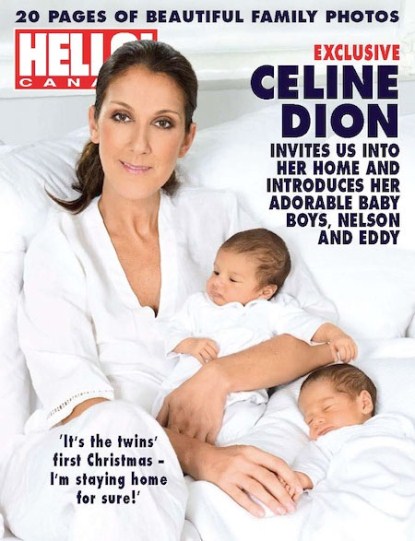 Canadian Celine Dion graces the cover of Hello Magazine with her adorable twin boys Eddy and Nelson.  Celine admitted to having considered up to 15,000 names in their search for the twins names before deciding .   They named  Nelson after the great South African anti-apartheid leader Nelson Mandela.  Eddy  from Eddy Marnay, who produced the singer’s first five records.

Celine also has a 9-year-old son, René-Charles, with hubby René Angélil.  In the interview for the magazine Celine speaks about motherhood – “I don’t know how women do it,” she tells HELLO! Canada editor-in-chief Alison Eastwood in an exclusive and intimate interview. “Every day René asks, ‘Did you sleep well?’ I’m like, ‘You must be kidding! There is no sleep! “‘

The magazine has 20 pages of photos of the whole family with Celine in white pajamas.  Celine explained she’s often in her pyjamas for most of the day. “‘I nurse both babies at the same time . . . I’m in my pyjamas until lunchtime and there’s no time to shower!'”