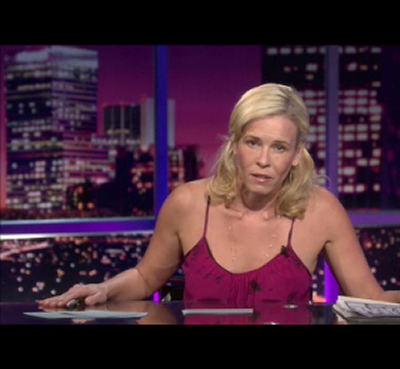 In a recent performance, Chelsea Handler laid down a verbal assault upon Angelina Jolie. She called her every name in the book! It was funny, I have to admit, I laughed. Still, some Brangeloonies got their panties in a wad over it and took offense.

From our report yesterday:

Chelsea hates Angelina and doesn’t for one second buy that she is this good person rescuing children in need around the World,” a friend of the comedienne tells me. “Everyone in Hollywood is scared to say what they really think about Angelina except Chelsea.”

Since, people have been saying that Chelsea is Team Aniston and only said those things about Angelina because of her friendship with the Friends star.

Check out the video for her response:

She said, “I’ve been making fun of Angelina Jolie since she made out with her brother.” She revealed that she’s been doing her comedy routine for five years. She added, “If I’ve learned anything from this, it’s to write some new jokes!”