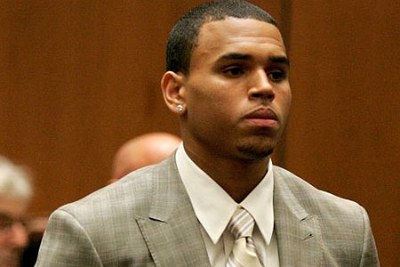 Singer Chris Brown is still trying to do damage control over the beating incident with Rihanna. Someone in his camp thought it to be a good idea for him to work with an anti-violence charity, since he’s probably not doing so hot on the radio charts.

He was convicted of assault on ex-girlfriend Rihanna last year, but didn’t have to serve any jail time. Since, he’s been a pariah in the media. He’s served his required community service, but the public obviously doesn’t feel it was enough of a penance to fit the crime. He needs some good PR! — At least, I’m sure he’s convinced of that.

He approached the founder of anti-violence charity, Man Up, Jimmie Briggs. Jimmie said, “I found Chris to be very humble, sincere honest and clear about expressing an interest in working with Man Up or an organization like ours. Chris is a young man, and he made a mistake. Some people may feel or not feel he hasn’t paid his dues, but he’s on a journey. We have to be supportive. My parting words to him were ‘Keep your head up.'”

I wonder how much he was paid to say all of that? Do you believe Chris has paid his dues?