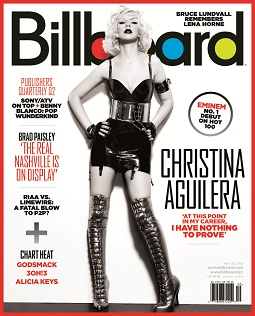 Via Billboard inside a soundstage at Sony Pictures Studios in Los Angeles last week, Christina Aguilera is talking about the inspiration behind her 2006 album, "Back to Basics," on which she paid tribute to the soul and blues artists who originally inspired her to sing.

Or at least that was what she was talking about. Now, seemingly out of nowhere, she’s describing the impetus that led to "Bionic," her futuristic new disc. "Sorry," Aguilera tells the 200 or so audience members gathered for this taping of VH1’s "Storytellers." "I get ahead of myself sometimes. But they can edit this. Cut and paste!"   To read the rest of this great interview visit BILLBOARD