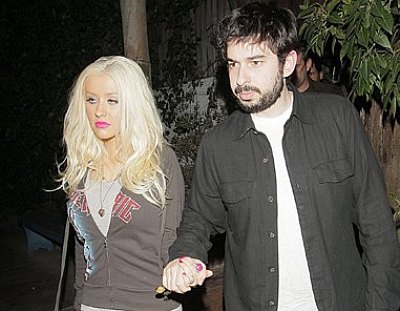 It seems that when things are falling apart in celebrity marriages, it suddenly emerges that the former couple had an open marriage. It happened with Demi Moore and Ashton Kutcher’s marriage. Things were seemingly heading South and then it was revealed that he frequently brings chicks back to their home, but Demi has to give them final approval.

Since Christina Aguilera separated and has filed for divorce from Jordan Bratman, it’s now coming to light that she liked to play a little bit, too. Interesting.

Apparently, Christina was partying with Jordan at The Abbey, when she instructed her bodyguard to find her a play thing. An anonymous woman (the wannabe hookup partner) said, “I was at The Abbey one night when Christina’s bodyguard approached me. He said, ‘My boss would really like you’ and pointed over to Christina.”

Then, she noticed Christina waving, but thought nothing of it because she was at the bar with Jordan. She went on, “The bodyguard told me it was an understanding within their marriage and that she brings girls home and Jordan’s okay with it. I met Christina in the bathroom and she told me she liked to play with girls. I ended up not pursuing anything with it because the situation just seemed so weird to me, but Christina was definitely looking to hook up.”

The woman added, “It’s funny because I had a couple girlfriends tell me that they were approached by Christina, too. My understanding was that Jordan wasn’t involved when she brought girls home, so maybe the divorce is because Jordan’s jealousy got the best of him.”

If it were because of his jealousy, then why did she end up filing?? That’s what I want to know.