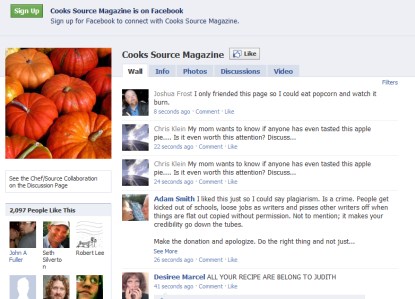 The author Monica  Gaudio of a short piece on apple pie entitled “As American as Apple Pie – Isn’t!” is screaming all over the internet about copyright infringement since she was made aware that her article appeared without her permission, or knowledge, in the “Cooks Source Pumpkin Fest Issue!”  The publication appeared on the facebook of Cook’s Source in addition to being published in print format –  to the tune of about 20,000 copies.

The article’s author, Monica, complained directly to Cook’s Source and was told by the managing editor, Judith Griggs, that the internet is ‘open source’ and that what they did was perfectly okay and legal.  In fact Griggs went on to state that she had improved on the original article “for free” and that Monica should be grateful and more polite in the future.  Well as it turns out Griggs is wrong – she does not have the right to lift and print the article without permission and may very well face legal action.  Apparently Cook’s Source’s advertisers are not happy about being associated with plagiarism and the growing furor about this on the interent is not helping!

Much plagiarism goes on and in today’s internet world the extent of it is greater than ever before.  Still we are disappointed when a magazine indulges in stealing another’s work, gets caught, and then instead of crediting the author and making amends they claim to have been acting properly thereby adding insult to injury.

Go Monica Go – we support you all the way – authors deserve full credit for their work.  Writting is hard work and obviously valuable – nobody has the right to the fruits of another’s labor without explicit permission from the creator.