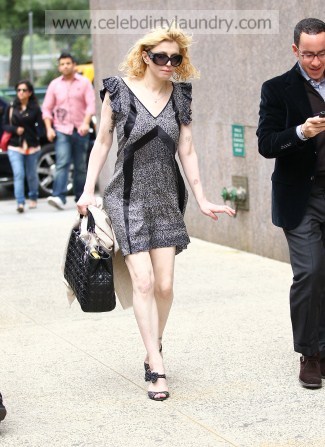 Courtney Love  flew into a rage and burst into tears when the hotelier Andre Balazs – who previously dated Uma Thurman – began chatting to a female business associate as they left the Boom Boom Room at the Standard Hotel in New York last week.

A source inside the club told the New York Daily News newspaper:

“They came to the Boom Boom Room together late Thursday night (13.05.10) and initially went their separate ways. At first, Courtney was chatting with a couple of guys about her music.   “But eventually, she and Andre snuck out to the smoking deck together and were hugging and being touchy. They both seemed very genuine.   “When Courtney and Andre decided to call it a night and hail a cab, Andre was stopped by a woman he knew. As soon as he started talking to her, Courtney hit the roof. It was obvious to everyone that the woman was a business associate, but not to Courtney. “She acted like a toddler! It got to bad that the woman Andre was talking to got really embarrassed and he had to apologise and walk away. By then Courtney was screaming and crying.”

Although Courtney – the widow of Kurt Cobain – hasn’t publicly confirmed her relationship with Andre, she recently expressed her feelings in an email to a friend.   She wrote: “I’m in lurve. It’s nice. Scary. I’m a great catch and he can be a bad boy but he loves me. He is the sweetest thing and he actually totally does respect me. His manners are impeccable but he is funny too (sic).”  Photo: Fame Pictures