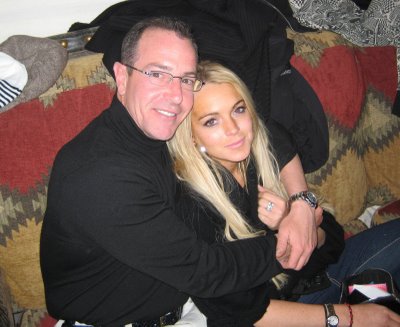 Lindsay Lohan has finally caved in and has allowed her father Michael to be put on the visitor’s list to see her during her rehab stay at the Betty Ford Center.

A source close to the meeting said, “It was an emotional reunion, there were hugs, kisses and even a few tears when Michael and Lindsay first saw each other.”

The meeting took place on Sunday just after 1pm PST at the facility where Lindsay is receiving treatment. The source said, “Lindsay met Michael at Betty Ford and the pair spent hours together…it was not a fleeting encounter, this appeared well-planned in advance. They also went shopping at a local Palm Desert mall, where they were seen walking around together and one point, were in a jewelry store.”

RadarOnline mentions that they reached out to Michael for comment, but, if you’ll recall, Michael’s last statement was about how he wasn’t going to make any further statements on his daughter.

I have pledged not to comment about anything relating to my daughter.

“However, what I will say is that I am an incredibly proud father tonight. My daughter is progressing extraordinarily well.”

A source close to the actress told RadarOnline.com that her father’s visit was at her invitation, while her mom, Dina, was back in New York preparing to appear on NBC’s Today Show.

“Michael turned up at Betty Ford with some gifts and items for Lindsay,” said the source.

Interesting. Mike, your visit is okay, just as long as mom Dina isn’t around and you bring gifts. Also, don’t forget to go back on your word with the media. Check.