BY Annemarie LeBlanc on April 5, 2010 | Comments: Leave Comments
Related : Dancing With the stars 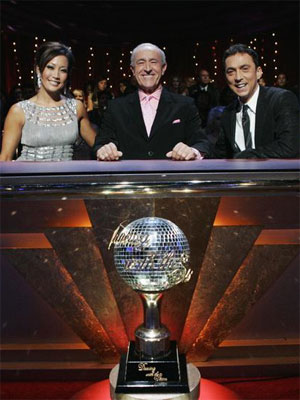 Evan Lysacek and Anna Trebunskaya dancing the Quick Step. Although Evan danced well, he had a few weird faces that creeped me out. Len said that Evan was euphoric and it cheered him right up, but he needs to work on his feet. Bruno thought Evan gave Anna the ride of her life, but again said that Evan needs to watch his feet. Carrie Anne thought it was great, said it was athletic and energetic. Scores: Rosie: 7 (faces were too creepy) Bruno: 9 Carrie Anne: 9 Len: 8

Buzz Aldrin and Askly Costa dancing the Waltz, the story is a father coming back from the war to meet his daughter. Buzz looked absolutely dashing in full uniform dancing to “A Wonderful World”. I don’t care what the judges say, his performance brought tears to my eyes. Bravo Buzz! Bruno said it was more like return of the king and when he started to move it really didn’t go anywhere. Carrie Anne, this week was about story telling and I believed it, there was a definite pure and innocent feeling to it. Len said it had an innocent charm, but it the dancing was poor and the routine too simplified. Scores: Rosie: 8 Bruno: 4 Carrie Anne: 5 Len: 4

Jake Pavelka and Chelsie Hightower dancing the Quick Step, it is an Egyptian theme, Jake opens a tomb to find Cleopatra. During practice, Jake and Chelsie have the usual scripted argument. The routine was corny and stupid, Jake’s steps were too slow and awkward. Carrie Anne thought Jake’s legs were too soft. Len said that the production was slick but the dancing was off. Bruno loved it, but thought Jake’s feet were not precise and lost the frame. Scores: Rosie: 6 Bruno: 7 Carrie Anne: 7 Len: 7

Niecy Nash with Louis Van Amstel dancing the Waltz, a story of love. Niecy looked absolutely stunning in a beautiful white gown, she messed up a few steps but the story telling was very compelling. Len thought it was brave because they did the story with no props, it was romantic but Niecy needs to work on technique. Bruno said it was a tale of love and it was done very well. Carrie Anne said it was confusing because she didn’t understand the ending. As the judges are giving out the scores a few tears fall down Niecy’s face, Niecy then says that people should have a right to choose who they love. Scores: Rosie: 8 Bruno: 7 Carrie Anne: 7 Len: 7

Chad Ochocinco with two time champion Cheryl Burke dancing the Paso Doble, the story is a man determined to get his woman. Poor Chad, I like him but he really sucked tonight, he danced way too slow, stiff and looked very angry. Bruno said that Cheryl released the Cracken, the determination is back but the lines were not. Carrie Anne said that Chad was miles ahead of last week. Len thought it was better but Chad has to work on his footwork. The judges are blind or paid off! Are they kidding, Chad was no different than Buzz – stiff and awkward, at least Buzz made you feel the story. Scores: Rosie: 5 Bruno: 7 Carrie Anne: 7 Len: 6

Pamela Anderson and Damian Whitewood dancing the Paso Doble, Damian is a Matador and Pamela, his partner who does not agree with Bull fighting. I thought she looked really nice, but she sucked. I didn’t feel the story and I thought her dancing was poor. Carrie Anne said that she really got the story that Pamela did not like bull fighting. Len said that Pamela really coped with the nerves being in the bottom two but they need refinement in the dance. Bruno said that it was like watching the Gypsy Queen with Brigitte Bardot and the performance was really good. They’ve got to be kidding! Scores: Rosie: 5 Bruno:7 Carrie Anne:7 Len: 7

Aiden Turner and Edita Sliwinska dancing the Quick Step. The story is a painter painting the women of his dreams and then she materializes. I loved it and thought it was believable; Aiden’s steps were quick and was not stiff and awkward like some of the other dancers. Len said that the Quick Step should be carefree but he found this one to be too careful. Bruno said that he thought that Aiden looked very happy but looked like a kid skipping in the meadow. Carrie Anne said she likes what she sees and Aiden’s confidence is growing. Scores: Rosie: 8 Bruno: 7 Carrie Anne: 7 Len: 6. Len gets booed by the audience, no kidding, his score was too low.

Erin Andrews & Maksim Chrnerkovskiy dancing the Waltz. The story is “trust”. Erin actually dances with a blindfold to prove her trust and she did fantastic! Bruno called Erin a “kinky thing”. Carrie Anne said it was beautiful and loved the prop, she thought it was profound and artistic. Len said he thought the dance was never going to start, it was boring and there was not enough of the Waltz. Scores: Rosie: 8 Bruno: 8 Carrie Anne: 8 Len: 7

Kate Gosselin and Tony Dovolani dancing the Paso Doble . The story is Paparazzi, a love/hate relationship. OMG, I feel so sorry for her. Not only was her outfit atrocious, her dancing was boring, stiff, awkward and embarrassing to watch. Carrie Anne said it was odd and hard to watch, she didn’t feel the emotion really came through. Len said it was too pedestrian. Bruno said she looked like she was walking, not dancing. Scores: Rosie: 5 Bruno: 5 Carrie Anne: 5 Len: 5

Nicole Scherzinger and Derek Hough dancing the Quick Step. The story is about two sailors slacking off. Len thought they took the title of the song too far, there was no Quick Step, they broke the rules with a lift. Bruno said that as a performance it was incredible, but agreed with Len. Carrie Anne said they broke hold, there was a lift, but she would buy front row tickets when they go on the road. I thought Nicole was overbearing and boring. Ofcourse she can perform, it is what she does for a living! I can’t wait for her to be voted out, hopefully soon. Scores: Rosie: 6 Bruno: 9 Carrie Anne: 8 Len: 6

Overall, Erin Andrews was the best and Kate Gosselin the worst.  It will be interesting to see what happens tomorrow night.  Our newest host, Brooke Burke was her usual untalented self, wish I had something good to say about her, but I don’t.  Rosie xoxo