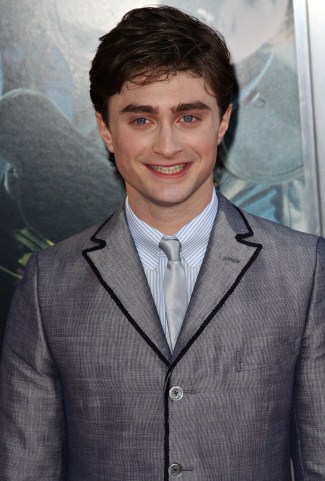 The British actor, who has played the lead role in the magical movie in all eight installments, says some actors have already finished work on the set of ‘Harry Potter and the Deathly Hallows’ and knows his time is coming to an end soon.   He said: "It will be very sad when it comes to a finish. But it’s something you have to accept.   "We’ve had a few people finish off their stories in the film, and they’ve been going home."

Daniel, 20, also claims to have had his first realisation the franchise was coming to a close it was ending when he was getting his make-up done on set recently.  He said: "I did have a moment the other day, in the make-up room that I have been in for 10 years now. "I did walk in and go, ‘Wow, this is hitting me. One day – in about four or five months from now – I’m gonna walk in here for the last time.’ Especially since, after we’re done shooting, they’re redoing the entire studio, tearing down and starting again."

However, one of the proudest things about ‘Harry Potter’ for Daniel is that many people have gained employment through it.  He told MTV.com: "What’s been amazing about ‘Potter’ is that ‘Potter’ has been the major film in England for the last 10 years. Our films have given a lot of people jobs, myself included."   ‘Harry Potter and the Deathly Hallows’ is to be released in two parts – one coming later this year and the second in 2011.  Picture: Fame Pictures